Tune in live from 4:00-4:30 PM on Chicago’s WCPT 820 AM and click the “Listen Now” banner. The interview will be available on Soundcloud after its broadcast.

Joan Esposito is proud to be an official member of the terrific line up on WCPT AM 820, Chicago’s live local progressive talk station, where she has been a regular fill-in host.

Her goals are to make the show inclusive, topical, and interactive. She will react to the news of the day and find out what is happening in the neighborhoods around Chicago. She will talk about politics, issues, and culture and have some fun along the way.

Joan is a long time member of the Sag-Aftra Union and previously appeared on Chicago’s WGN Channel 9, ABC 7 and NBC 5 as both anchor and reporter. For more than 10 years she led a media training company that worked with local, national and international clients. 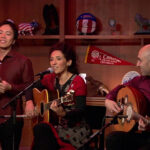 Saffron Caravan and Dr. Sternberg featured on WTTW to over 1 million people