Nigel Osborne, also a Genesis’ Human Rights Salon Panelist, was featured on NPR/WBEZ’s Worldview to discuss how music can prevent conflict and help bring about healing.

Nigel Osborne is a composer and human rights activist. He is the Co-chair of the World Economic Forum on Culture and Emeritus Professor of Music at the University of Edinburgh. His works have been featured in most international festivals and performed by many leading orchestras and ensembles, from the Moscow to the Berlin Symphony Orchestras, and from the Philharmonia of London to the Los Angeles Philharmonic. He has had close relationships with the Scottish Chamber Orchestra, City of London Sinfonia, London Sinfonietta, Hebrides Ensemble and Ensemble Intercontemporain, Paris. He has composed extensively for the theatre as well. He is the winner of the Opera Prize of Radio Suisse Romande and Ville de Geneve, the Netherlands Gaudeamus Prize, the Radclie Award and the Koussevitzky Award of the Library of Congress, Washington. Professor Osborne studied composition with Kenneth Leighton, Egon Wellesz, Arnold Schoenberg, and Witold Rudzinski. He also studied at the Polish Radio Experimental Station, Warsaw.

For multiple decades, he has worked in Serbia, Bosnia, Herzegovina and the former Yugoslavia, East and West Africa, the Middle East, the Caucasus and South East Asia helping traumatized children heal through music. He has created multiple operas about his work with the children of Mostar, some of which have been performed internationally in partnership with British-based Opera Circus. An anticipated 2016 world tour of a new operatic work, Naciketa, is currently in progress.

He continues to extensively study both the neurophysiological and neuropsychological benefits of music. Professor Osborne was a 2014 Salzburg Global Seminar Fellow and Faculty Member. 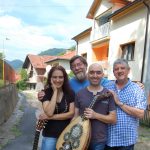